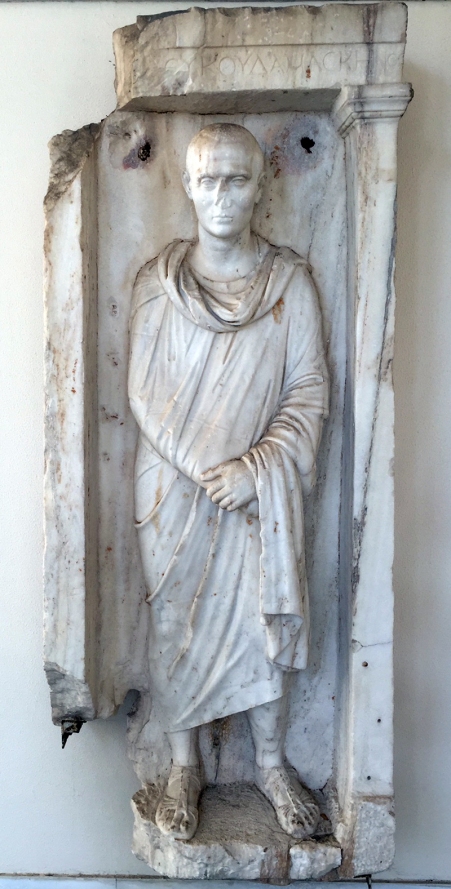 At the January 2019 Annual Meeting of the Archaeological Institute of America in San Diego, I was able to present my preliminary observations and thoughts on a second-century CE Roman grave stele housed at the American School of Classical Studies at Athens. While the stele was properly studied in 1965 by Sterling Dow and Cornelius Vermeule, I attempted to place the stele and its subject back into the wider context of Roman Athens, especially considering cemeteries and Syrians in Greece. I look forward to working more on this subject in future research.

For more on the discovery of this stele and two other stelae in the cemetery on modern Vasilissis Sophias Avenue in Athens, see the blog post by Natalia Vogeikoff-Brogan, “The Man from Damascus, the Good Wife, and Baby Solon: R.I.P. at the American School of Classical Studies at Athens.”

A Dameskenos at the American School: Revisiting Notions of Identity & Death in Roman Athens

Any member of the American School of Classical Studies at Athens (ASCSA) who has spent time on the porch of Loring Hall, the School’s residence hall, will be familiar with the looming Roman grave stele of Damaskenos hanging on the walls there. The relief is over 1.90m tall, depicting the stern-faced man, wearing a himation, with hands clasped. The fragmentary inscription above him identifies the man as Dameskenos, the son of Seleukos.

Originally discovered in 1894 in the area that now houses the French Embassy of Athens on Vasilissis Sofias Avenue, the Damaskenos relief, along with a handful of other funerary sculptures, came into possession of the ASCSA shortly thereafter. The relief then found a final home in Loring Hall after its construction in 1929. The relief was only ever published in 1965 in Hesperia by Sterling Dow and Cornelius Vermeule, who desired to begin to tell the story of Dameskenos, because they “venture[d] to suggest [the relief] deserves better” (274). Dow and Vermeule give a close reading of the style of the relief and its inscription, suggesting that it was carved in the early second century CE. Only passing mention is made to Dameskenos’ Syrian heritage.

Since the initial publication of the relief, new excavations throughout the city of Athens have altered our understanding of the physical layout of Athens and the inhabitants therein. Thus, this paper presents a new preliminary reading of the Dameskenos relief, placing this understudied grave relief into a wider context of Roman Athens, not just a random find. We now know better the placement of various Roman cemeteries in Athens (e.g., Kerameikos, the Sacred Way, etc.), especially near the find spot of the relief, to the northeast of Syntagma Square. Further, more attention is being paid in current scholarship to questions of identity in Roman Athens, such as those groups considered to be foreign migrants (versus migrants from within Attika), particularly Syrian populations. We can now consider how the individual from Syria on this grave relief could have interacted with other populations in Roman Athens. Thus, this paper updates the original presentation of Vermeule and Dow—and how we can better understand Dameskenos and his place in Athens of the second century CE.