Here is the abstract for the talk I gave for the Synoikismos Seminar at the Université libre de Bruxelles, entitled, ‘Fluid Identities: ‘Sacred’ Roman Water-Displays in Fora,’:

Until fairly recently, most scholarship on water-display during the High Roman Empire has focused on typologies, along with the political (e.g., imperial eugeretism) and social concerns of water-display. Roman Corinth offers a further interesting avenue of inquiry into water-display. Framing the forum and the adjacent area are a number of fountains: Peirene, the South Stoa fountain, the Fountain of Poseidon, Glauke, and the North Nymphaeum. Recent work has investigated how the Romans exploited local Greek mythologies of these fountains, in order to “cultivate memories and shape identity,” such as with the Peirene, where Bellerophon tamed Pegasus.

The water-displays of Corinth, though, are part of an under-studied Empire-wide phenomenon of installing fountains in fora, the most public space of the Roman city. Just as the Corinthian fountains have mythical pasts, at other sites throughout the Empire, fountains in fora often take on ‘sacred’ meanings, such as the fountains renovated by Augustus in the Forum Romanum, the monopteros fountain of Argos, and the fountains associated with the Imperial Cult at the forum of Conìmbriga, Portugal. The ‘sacred’ nature of these water-displays is also tied to space, which can also be understood in this case in terms of performance and memory. This paper will attempt to pursue sacred landscapes in public spaces of the Roman world, created by water-displays. Thus, a similar vocabulary of fountain design, in a similar type of setting, allowed for a common Roman identity throughout the Empire. 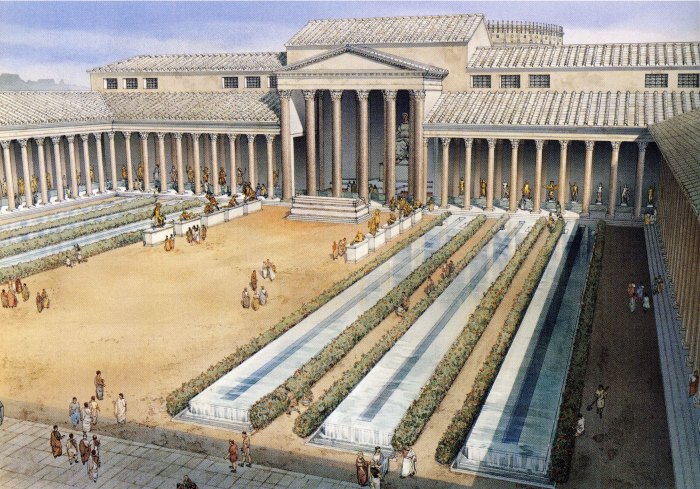