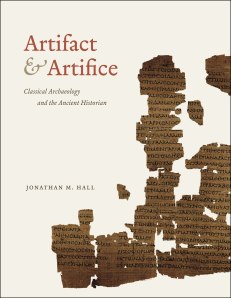 I just finished a great read for all classicists, no matter their discipline: Jonathan Hall’s Artifact & Artifice: Classical Archaeology and the Ancient Historian (Chicago, 2014). Hall explores how the field of Classics developed, highlighting the rift between history and archaeology. Through a series of well-chosen case studies, the reader is given much food for thought.

In discussing how ‘big digs’ used material culture to clarify dates and functions of buildings, like at the Athenian Agora. What he says about the students of the various schools in Athens was quite appropriate, I noticed after spending a year there:

“It is still not uncommon for newly enrolled students in the foreign school to make their first visits to sites with a volume of Pausanias’s Descriptions of Greece in hand. The continuing dominance of a philologically oriented approach to antiquity is illustrated by the fact that, even today, graduate students to the American School of Classical Studies–a virtual prerequisite for professional inculcation into classical archaeology–are still expected to sit examinations in Greek unseen translation.” (p. 10)

As a classical archaeologist originally trained in Latin and Greek, I have always felt comfortable with ancient languages of the Greeks and Roman (though, I know not as comfortable as my philologist colleagues). But this still brings up the debate that has begun recently about the Greek language exams at the School, such as with the article and the response of the former director of the School, Jack Davis. Luckily, we do not have the modern Greek exam, which was once required–though I am sure it would not hurt to have better modern Greek skills. What would happen if the School got rid of the Greek exam? Would the playing field for Regular Member spots be open to a wider pool of candidate? How might that change the School? Much food for thought and discussion.